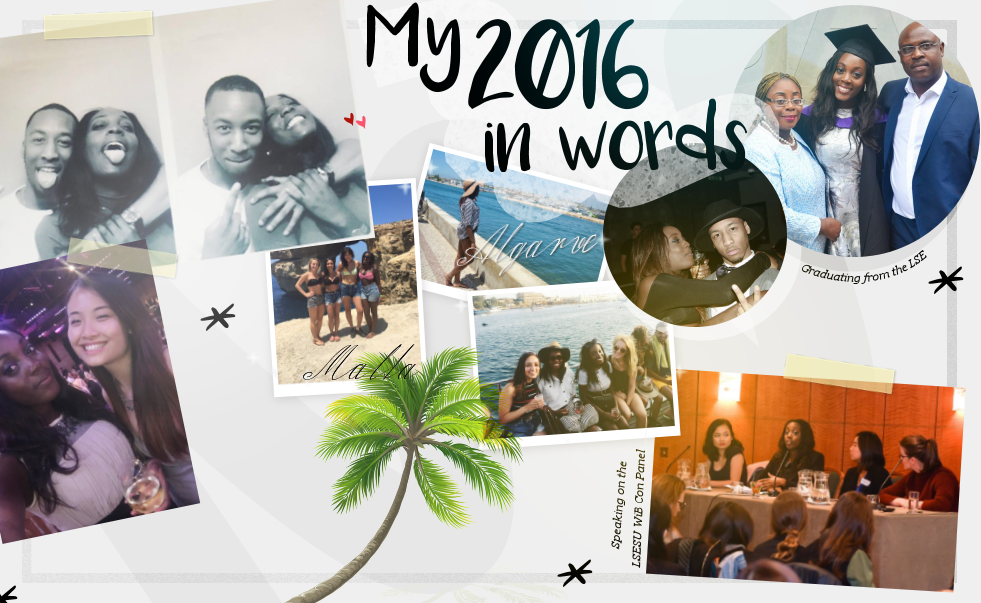 2016 was incredible because I have never felt as confident in myself and my abilities as I have this year. For the majority of the year I’ve been sitting on cloud nine, patiently waiting for my next fall that will further push me to grow even more. 2015 was a tough year and I reached a pretty low point in my life due to toxic friendships and a real lack of confidence in myself, along with a real lack of thirst for success, but I truly believe down times are the best times in your life – because nothing pushes you to grow more. A crappy 2015 is what led to 2016 being one of my best years to date. Follow the jump to read my year in review…

In January 2016 I attended a BME Entrepreneurship panel and it made me step back – look at my blog and think – “wait, this could be something pretty cool?” 2016 was the year that I took my blog from more than just a hobby, to something I now see as a part-time job. I purchased a DSLR camera (with the help of the rents), I created an Excel file such that I can track my PR contacts, my uploads and my blogging income, and as of more recently, I also hired a photographer. Let me tell you – blogging is not easy – it can be extremely frustrating at times and leaks with the quote “comparison is the thief of joy”, and if I didn’t enjoy doing it so much, I probably would have quit by now. Regardless, 2016 was a decent year for me blogging wise, I became an editor for FBL Bloggers, worked with a number of brands including John Frieda, House of Fraser and Gemporia, and I was even on the verge of getting sent on an all expenses paid bloggers trip to Paris! But had to turn it down as it was my first week on the desk of my full-time job (can’t be taking a holiday in week 1, lol). Despite this, I actually feel as though my content quality took a slight dip this year and has only recently just started to pick up again to a level stronger than what it had previously been. Being a fashion blogger is really not easy when you’re a poor student with priorities to pay a ridiculous rent bill in London, and unfortunately it does help a lot in this industry to have a bit of money to fund yourself, your outfits, your photos, your tools, your props etc… Which is something I am only really doing comfortably now. Regardless, I feel like 2017 will be a really good one for my blog, I’m not sure why, but I just feel it.

I think the common thought is that relationships get harder with time – and I can attest to that to a certain degree as in the first, lets say, six months of your relationship everything is all roses and butterflies. But, this year I passed 2 years with my boyfriend and, given that we had a pretty good relationship anyway, our relationship is actually better than it’s ever been. It’s reached that point where it’s starting to feel like – “woah, wait here. We’ve actually been together for a while.” This will be our third new years now that we’re going into together. What can I sayyyy. He’s my best friend, he’s my other half – he makes me the best version of myself and a lot of my growth these past few years he’s played a huge role in (including this blog!). I’m truly blessed and couldn’t be happier with him in my life.

In your first year of university you’ll meet a million new people and make tons and tons of new friends – but in my second year of university I became very unbothered with most people, I’ve spoken about this before, but I wouldn’t go to a lot of the events I was invited to if I couldn’t be bothered, and I became very content with just spending my time with my boyfriend (mostly) and also my flatmates. However, this year I realised that such laziness is not a practical way to live a fulfilled life going forward and I started to invest more time into my friendships, and be less MIA. Overall, I feel as though this year I established a few meaningful relationships with several people. I have some really amazing people around me and I feel blessed with the friends I’ve been able to make over the years.

When I did my 2015 summer internship, everyone I met (that already worked full-time) told me that I should not bother with saving until I started work. Basically, given the ridiculous amount of holiday time we get in uni, I was advised to spend every last penny making experiences that I would find a lot harder to make when working. So I did exactly that – after my internship I visited Cyprus and Rome, then this year flew out to Portugal, Miami and Malta. By the time I started work I was well and truly swimming in my overdraft with no regrets. These definitely helped in making 2016 one of the best years of my life. There are few things as priceless as experiencing other countries, other cultures, or even just relaxing on the beach. Without a doubt, one day I want to just spend some time travelling the world, and I think this year gave me just a taster of what that would be like. To read more about my travel experiences this year, check out my 2016 Travel Favourites blog post that I wrote up a few days ago.

I guess the biggest accomplishment of the year for me would be that I graduated. It was all quite bitter sweet for me as I graduated with a 2.1 and wanted a 1st so bad that I literally felt like my world was crashing down. A lot of the close people around me (such as my old flatmate and my boyfriend) were all getting 1sts across the board with their exams so it did leave me feeling very inadequate and really not very smart at all. In the end I learned to be grateful, I graduated from one of the best universities out there with the only degree classification that is needed to get any good job out there. I may not be Albert Einstein, but its gotten me to where I needed to be and although getting that 1st would have been amazing, it really wouldn’t have impacted where I am today.

2014 and 2015 were both years with a lot of turbulence in them for a number of reasons, but I can say that at this moment in time, and throughout this year – my life has been strangely stable. No major dramas (well, maybe one…), no friendship or relationship issues, no career-related issues, things were surprisingly smooth this year compared to previous year (just waiting for something to knock me off again)! So although I have no major, resounding lessons I’ve learned this year compared to previous years, one thing I’m taking away with me is the art of appreciation. For a 21 year old, I really don’t live a bad life compared to a lot of the hardships people experience, and I definitely have learned to take more time to appreciate my blessings rather than complain over silly little things.

1. Lead and healthy and fit lifestyle
2. Continue to travel and make experiences around the world
3. Spruce up my wardrobe, my makeup collection, and invest in some classic, timeless pieces for my collections
4. Save up multiple Ks to eventually go towards a mortgage
5. Grow Skylish to a point that I feel happy, proud and satisfied with my content and social media presence
6. Pursue my own business ventures (check out Genee which I’m launching with my boyfriend) and make an impact with them

Let me know how all of your years have been!

Blogging for 5 days straight has been harder that I thought it’d be, but I’ve really enjoyed it and hope I can do something like this again soon. However, with that, I’m taking a little break from blogging and will be back on Jan 9th where I’ll resume with my usual schedule and usual posts (and try and be as consistent as I can!) You can read all of my 2016 roundup postsbelow in the mean time…

Have a wonderful new year beaurriful people, and thank you for all the support on the blog over 2016! Let’s hope 2017 can be even better! 😉

Hope that you achieve all of the goals you’ve set for yourself! I’m trying to save for a mortgage too, but it’s very daunting trying to save that much. Why do houses have to be so expensive??!!

Looking forward to seeing more posts in the New Year!

Thank you – that means a lot! Hopefully we can both save a decent amount but mortgages are soo expensive D:

I just randomly found your blog and it looks really great ! I immediately signed up to your newsletter 🙂 I have made some resolutions to, but I do this every year and I always only implement one or two of them, but anyways I hope this years it’s going to be different as I also have changed a lot 😉 And I wish you a Happy New Year! Looking forward for more…

Thank you! I’m sometimes not great at keeping to my resolutions too haha – Happy New Year!

I really liked following along your 5 days straight of blogging! It sounds like 2016 was an amazing year for you in terms of growth ❤️ I’m so proud of you and really enjoyed reconnecting again! I wish you nothing but happiness and success in 2017, with your mindset, you’ve got this girl! ??

Aw thank you Pauline, that means a lot! Very happy we reconnected too! All the best for 2017 😀

I love this! It’s so important to look back and see how far you’ve come. It’s hard to see the overarching view when you’re just going day to day, so taking a step back and reflecting on what you’ve learned and experienced is so great. Happy New Year!

This was such a great post! Congrats on your accomplishments, especially graduating.

I’m glad 2016 was overall a good year for you. May this year be even better.

2016 wasn’t a great year for the world but it was for me! So glad to hear that it was for you too x

Great year for you and you made some really great resolutions too.

Happy New Year to you I wish you a great year. May this year bring you so much joy and fulfillment.